Inspired by a gift of a Pompeian fresco fragment from Donald Saff, Rauschenberg derived imagery for the series from photographs he took in Turkey when he attended the United Nations Conference on Human Settlements (Habitat II) in June 1996. Similar to the method used for Waterworks (1992–95) and Anagrams (1995–97), Rauschenberg transferred imagery from Iris prints. For the Arcadian Retreats, however, Rauschenberg used a technique developed by Saff, transferring the imagery onto wet plaster rather than paper supports. Each work is housed in a wood and aluminum frame designed by the artist. 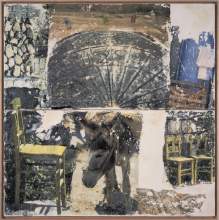