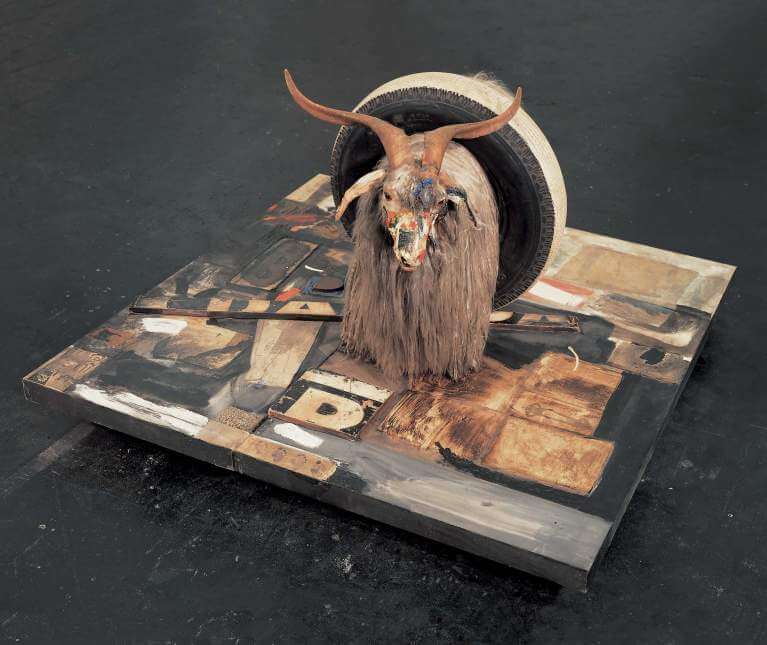 Monogram (1955–59) belongs to the series of Combines that Rauschenberg made between 1954 and 1964. A term coined by Rauschenberg, Combines merged aspects of painting and sculpture to become an entirely new artistic category. Art critic Leo Steinberg observed that the orientation of the Combines challenged the traditional concept of  the picture plane as an extension of the viewers space, providing a window into another reality. Instead, Steinberg argued, a Combine is like a tabletop or bulletin board—a “receptor surface on which objects are scattered, on which data is entered.” Rauschenberg had seen the stuffed Angora goat—the focus of Monogram—in the window of a secondhand office-furniture store on Seventh Avenue in New York. Paying fifteen dollars toward the asking price of thirty-five dollars, Rauschenberg brought the goat to his studio, and before its completion in 1959, Monogram evolved through three states documented in drawings and photographs. The title is derived from the union of the goat and tire, which reminded Rauschenberg of the interweaving letters in a monogram. 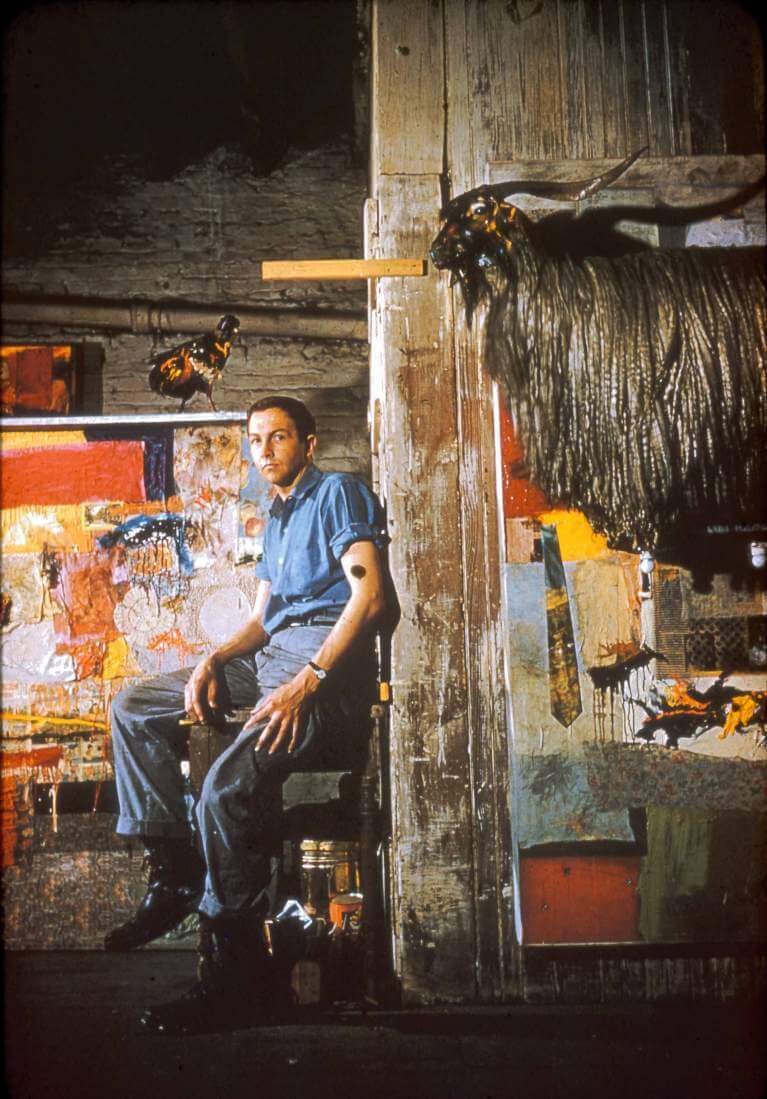 As the largest object Rauschenberg had ever tried to incorporate into a painting, it took numerous iterations before he was satisfied that “the animal looked as though it belonged in a painting,” as critic Calvin Tomkins remarked. In its first incarnation in 1955–56, the goat is poised on a shelf attached to a Combine painting. According to Tomkins, Rauschenberg was dissatisfied with this version because the goat could only be viewed from one side. 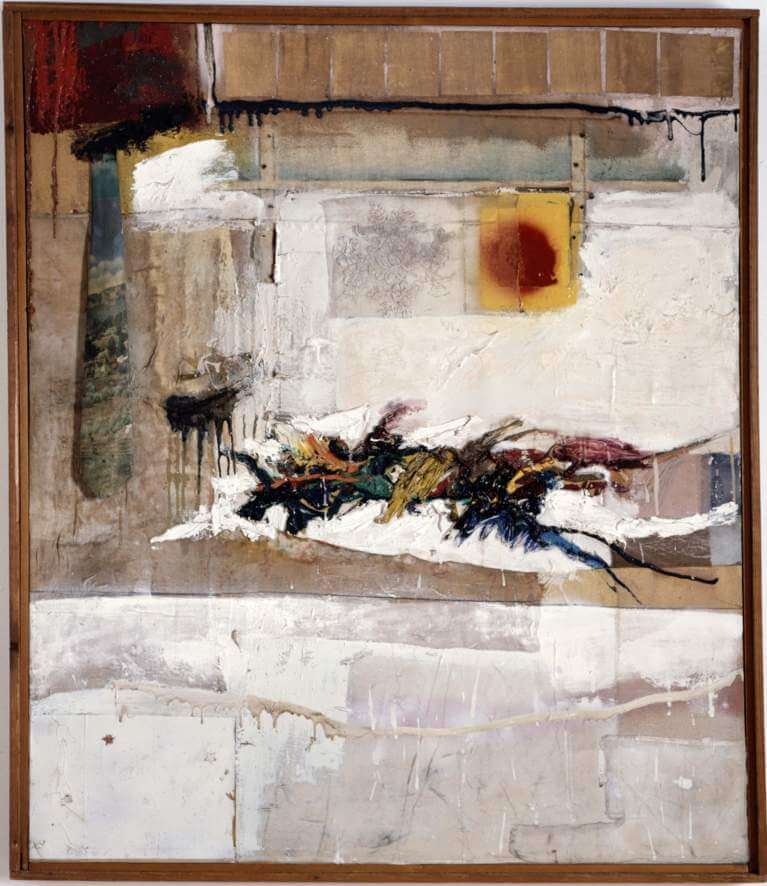 The Combine painting against which the goat is shown in the first state of Monogram was later reworked into the Combine painting Rhyme (1956). When Monogram was first exhibited at the Leo Castelli Gallery in 1959, art collector Robert Scull offered to purchase the work and donate it to MoMA; the museum’s director, Alfred H. Barr, Jr., however, declined the offer and the work was purchased by the Moderna Museet, Stockholm in 1964. 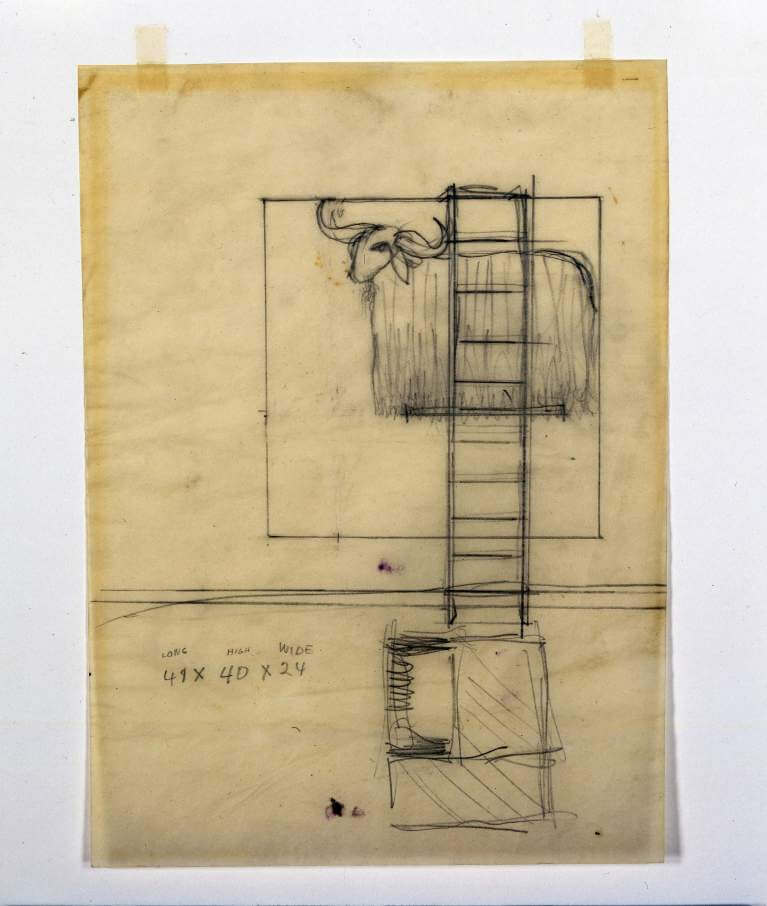 A preliminary sketch for Monogram shows that early on, Rauschenberg had considered mounting the goat against a nearly square (rather than vertical) panel and placing it behind a ladder. The sketch is now in the collection of Jasper Johns, whose studio was one floor below Rauschenberg’s at the time that he was working on Monogram. During this period, Rauschenberg and Johns viewed each other’s work and exchanged ideas on a daily basis. 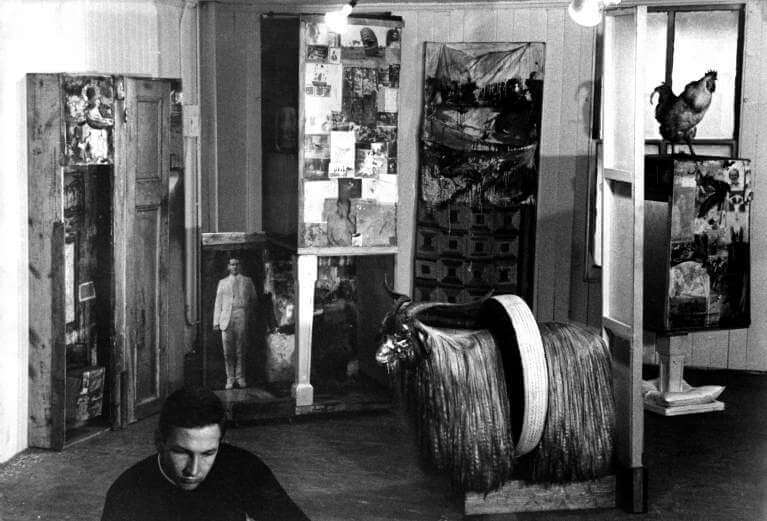 Later in 1956, Rauschenberg worked on Monogram again. In its second state, positioned in front of a vertical panel, the goat is encircled by a tire with its tread painted white and standing on a wooden platform. The panel is from a dismantled five-panel White Painting from 1951. 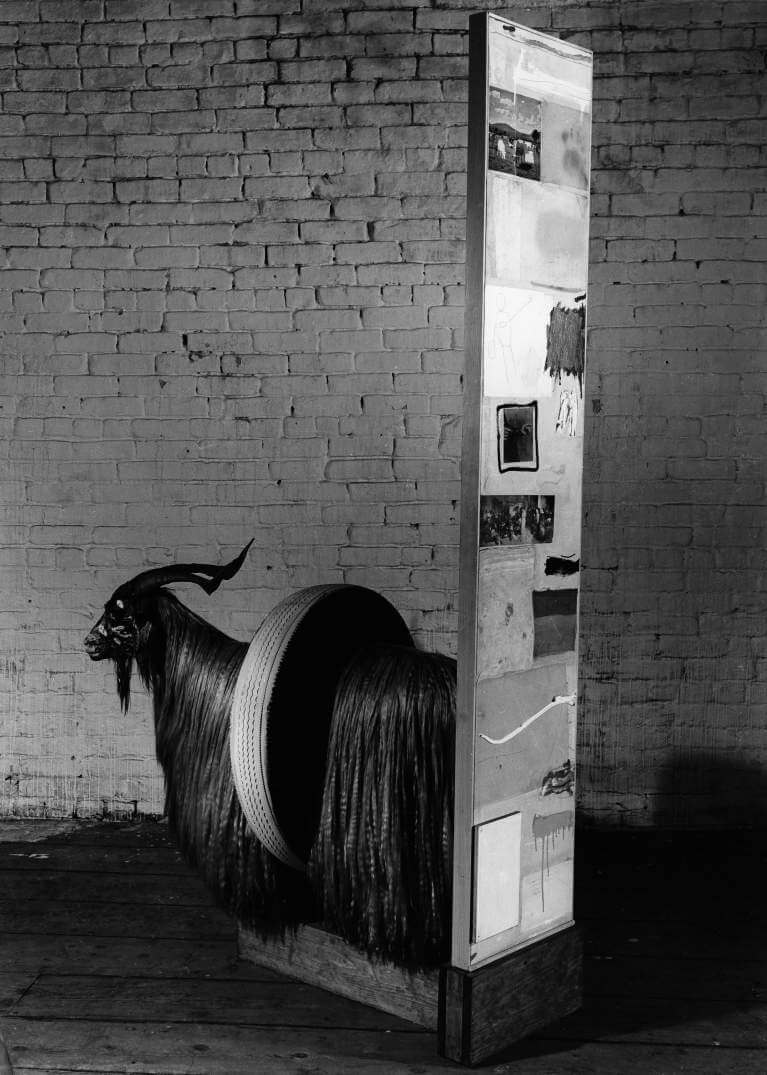 In the second state of Monogram, one side of the vertical panel is painted and collaged. The light colors of the paint and the sparing, flat application of collage elements were characteristic of the style and pale tonalities of the Combines made between 1955 and 1958. Referred to as the “blond paintings,” these works seem more refined and serene than the earlier Combines, notes art historian Roni Feinstein. Rauschenberg remained unsatisfied with the second version of Monogram, as he felt that the goat appeared to be pulling the painting. 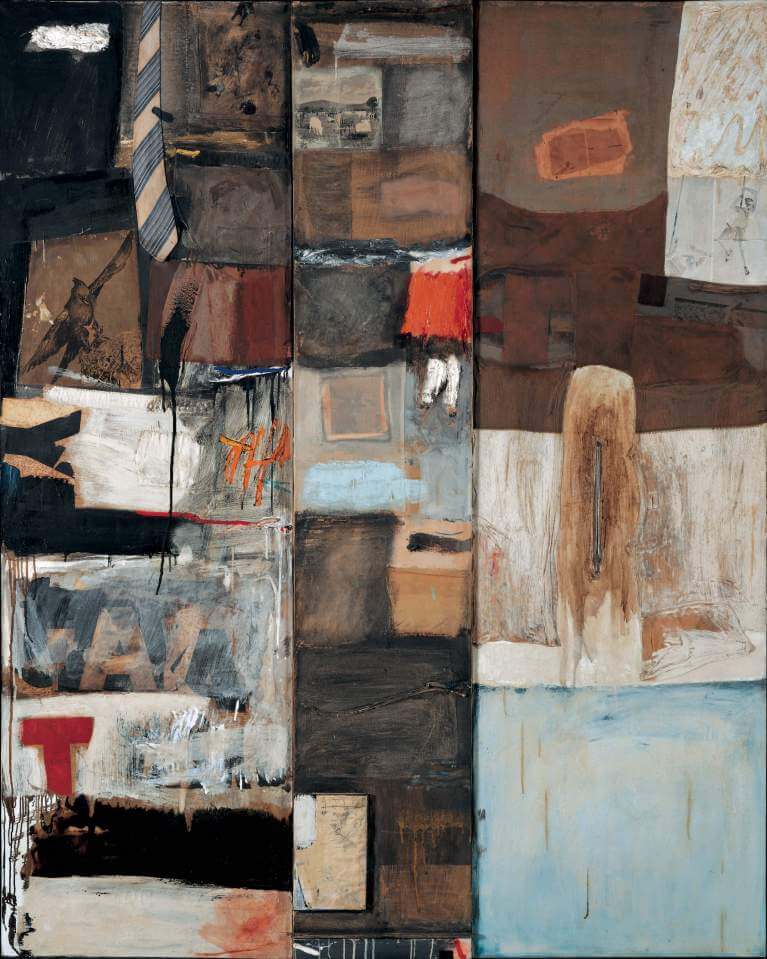 The vertical panel in the second state of Monogram did not remain in the final work and was significantly reworked and incorporated into the central panel of Summerstorm (1959). 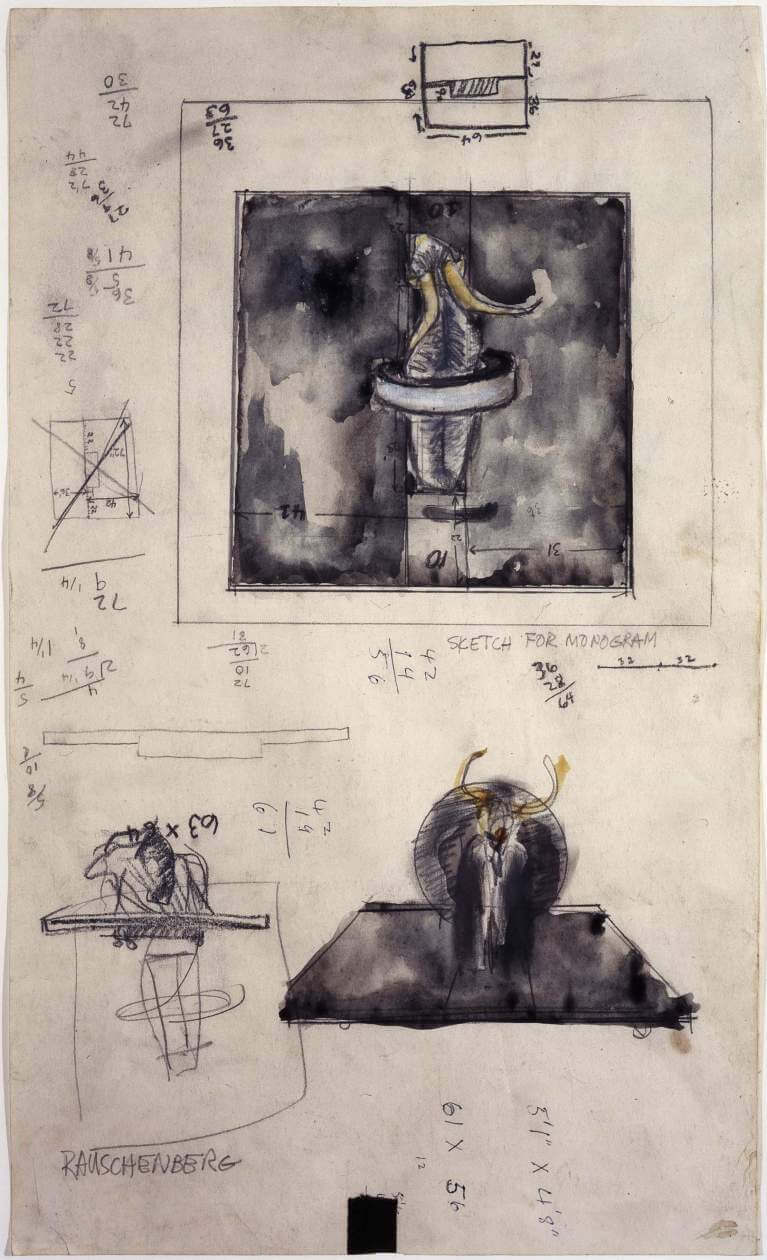 In the last incarnation of Monogram, following the suggestion of Jasper Johns, Rauschenberg placed the square canvas horizontally on the floor and centered the goat, as if in a pasture. This preliminary sketch shows various numerical calculations and Monogram from several angles, as it is in its final state; the goat is still encircled by the tire and the entire platform is raised onto casters. 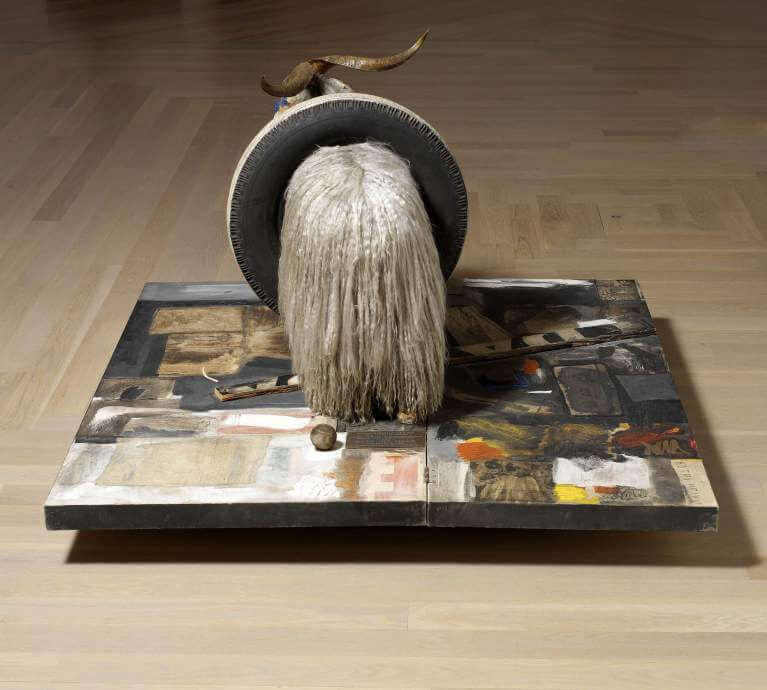 Art historian Roni Feinstein suggests that the horizontality of the work surface is reinforced by the four footprints at the edge of the canvas, the heel of a rubber-sole shoe, and other essentially flat collage elements, including a street barricade with signboard lettering and photographs. A paint-smeared tennis ball is placed on the platform behind the goat’s hind end.

Monogram was included in Rauschenberg’s mid-career retrospective, Robert Rauschenberg, which opened in 1976 at the National Collection of Fine Arts (now the Smithsonian American Art Museum), Smithsonian Institution, Washington, D.C., before traveling to museums across the United States. The curator of twentieth-century painting and sculpture at the National Collection, Walter Hopps, had suggested that Rauschenberg be chosen as the living American artist to honor the country’s bicentennial. As curator of the exhibition, Hopps was actively involved in the complex installation of Monogram at the various exhibition venues.

Video of Monogram installation at the Guggenheim Museum, 1997

Rauschenberg and art critic Calvin Tomkins speak about the history and significance of Monogram at the time of the artist’s late-career retrospective, Rauschenberg: A Retrospective, which opened at the Solomon R. Guggenheim Museum, New York, in 1997 before traveling internationally.