Coppertone is a small series of four works on copper featuring silkscreened images of Rauschenberg’s own photographs and the application of tarnishing agents on the metal surfaces. It is related to the concurrent Copperhead series (1985/1989), the first series on copper, which Rauschenberg undertook after his 1984 research trip for ROCI CHILE, part of the Rauschenberg Overseas Culture Interchange. Three of the four works in Coppertone are titled Beuys, after German artist Joseph Beuys, who died in 1986. A pioneer in Conceptual, performance, and process art, Beuys frequently used copper in his own work to represent spiritual conduction. The image of Beuys in his three namesake works is drawn from Rauschenberg’s photography archive. 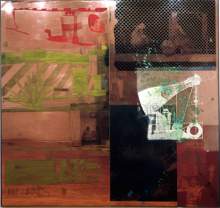