After Rauschenberg had moved his main studio from New York to Captiva, Florida in 1970, his art incorporated the materials around him: cardboard and sand. This series consists primarily of sculptural works made from cardboard boxes coated with glue, then sand, or wrapped in gauze. While they appear to have the heft and weight of massive Egyptian stone works, they are deceptively light weight. During this period, Rauschenberg had a particular interest in the Middle East and in the art of ancient Egypt. The Early Egyptians are often painted with neon acrylic which reflect on the wall adjacent, creating a luminous halo around the work. 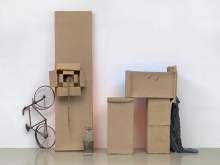 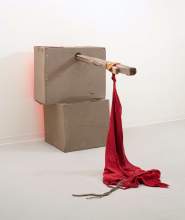