This is a series of works on paper made with flattened paper bags, gouache, and pencil. Rauschenberg moved from New York to his new home and studio in Captiva, Florida in 1970. Without the influence and distractions of the city, his art took a pendulum swing to the simplest of materials—cardboard boxes and in the case of the Egyptian Series, paper bags.

Although he had retreated to an isolated island, his vision and interests remained global. This series followed his Venetians (1972–73) and it was shortly before he made trips to the Middle East. 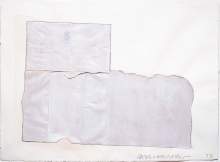