For this series, Rauschenberg designed molds into which he poured colored paper pulp and incorporated images that he had previously silkscreened onto Japanese rice paper. The Fuses are published by Gemini G.E.L., Los Angeles, in collaboration with Marius Peraudeau, director of the Moulin à Papier Richard de Bas, a producer of handmade paper in Ambert, France, where Rauschenberg made the prototypes in 1973, along with those for his Pages series (1974). 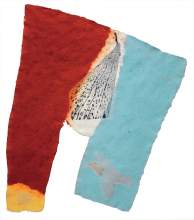