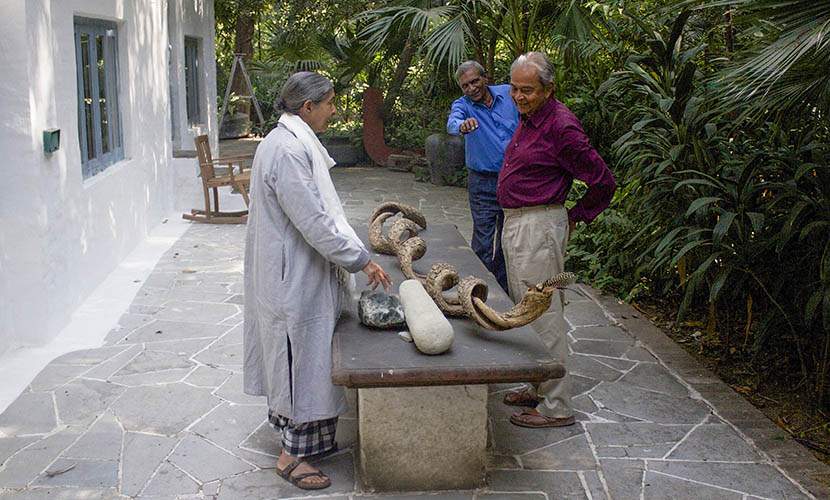 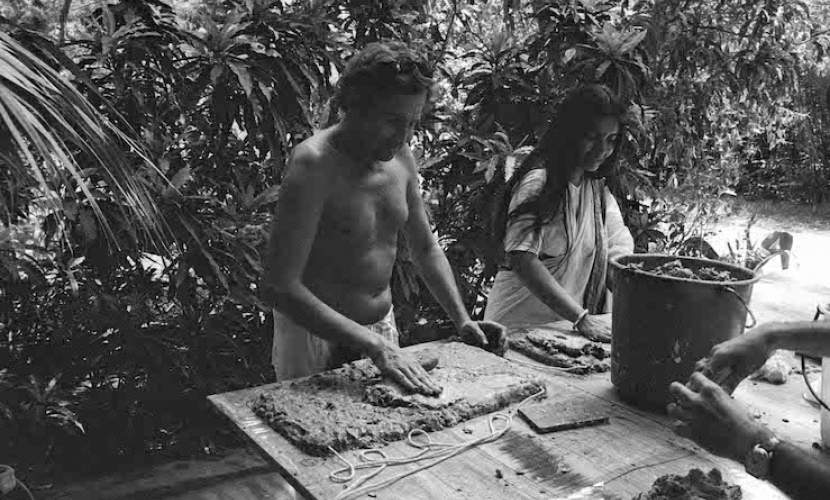 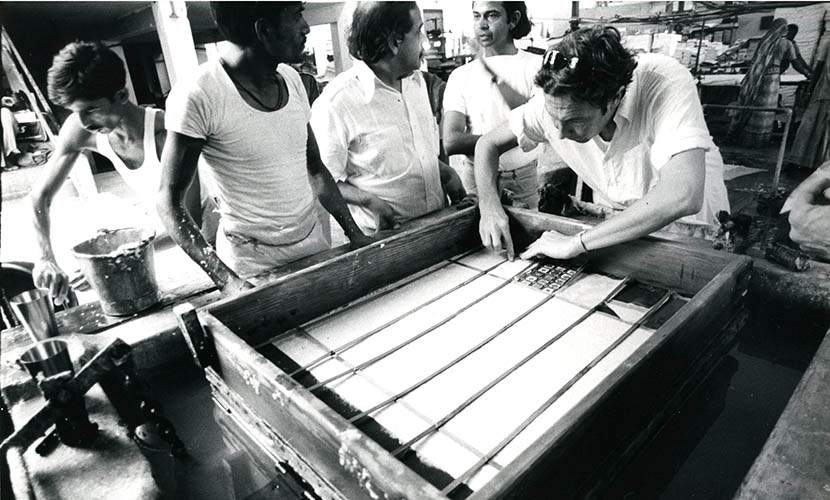 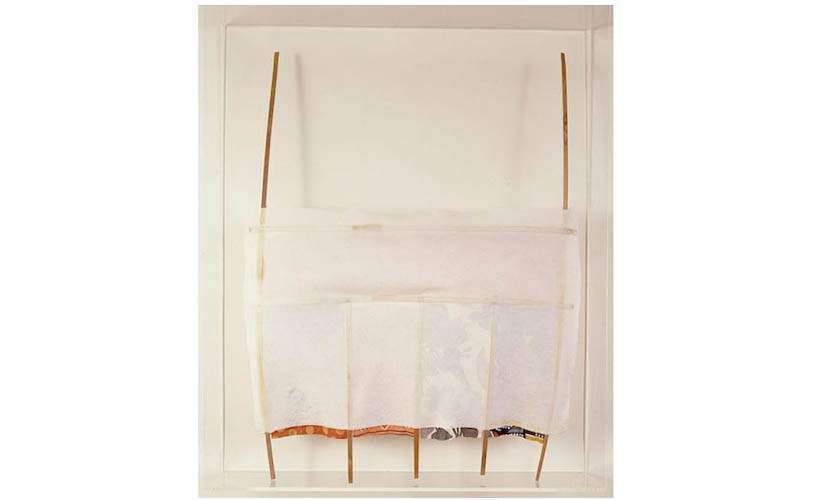 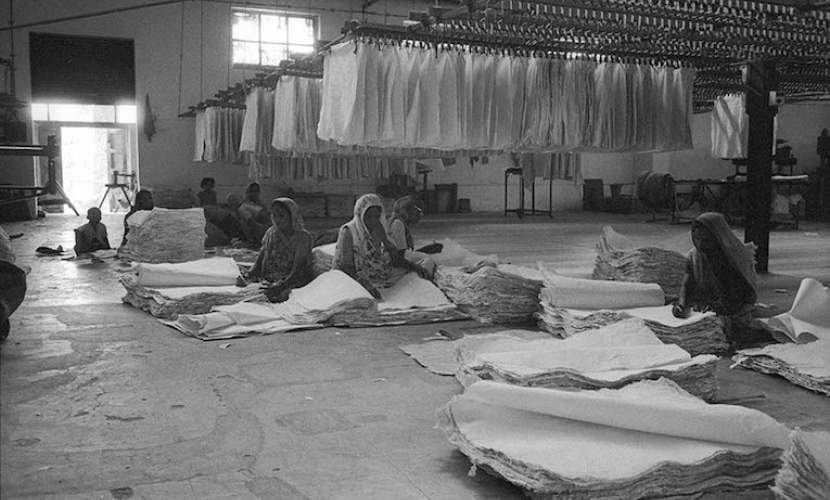 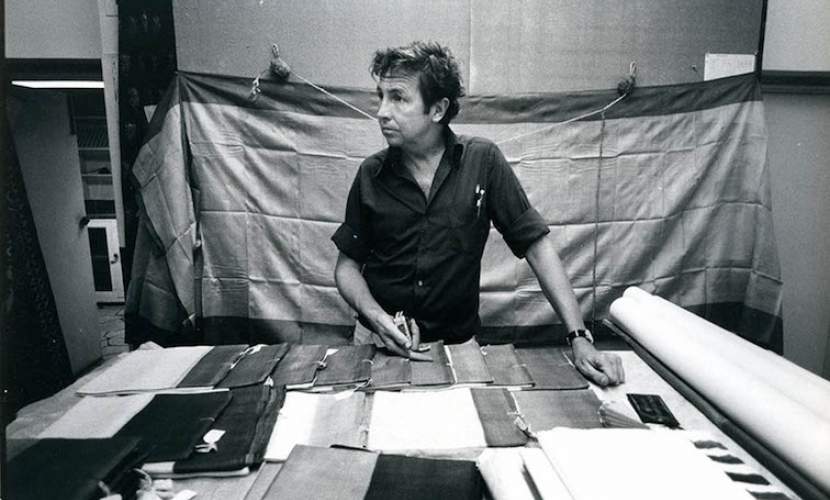 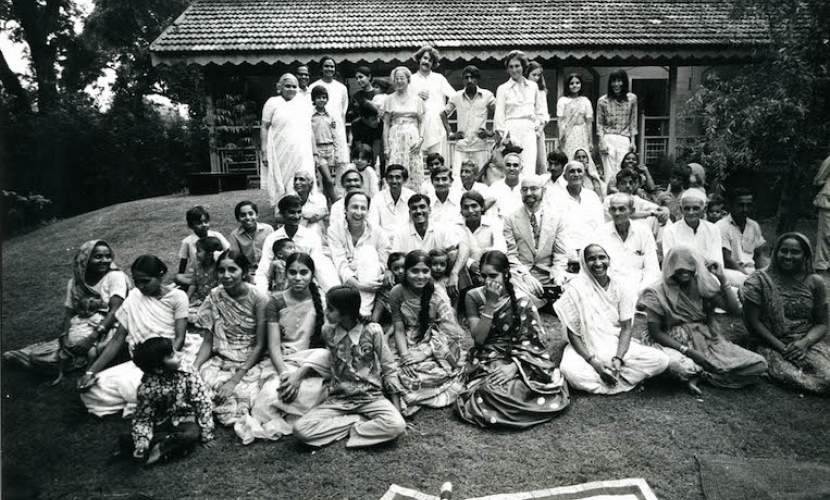 Celebration at Asha and Suhrid Sarabhai’s house for everyone involved in the Bones and Unions project (both 1975). Photo: Gianfranco Gorgoni, www.gianfrancogorgoni.it. Courtesy Suhrid Sarabhai

Wife and husband Asha and Suhrid Sarabhai established their roles in Indian textile manufacturing and design with artistic conviction and ethical consciousness. Suhrid and his elder brother Anand were young men in 1964 when Rauschenberg first visited the Sarabhai family estate in Ahmedabad while he toured with the Merce Cunningham Dance Company. Suhrid later joined his family’s business at the Calico Textile Mills. Asha is an accomplished clothing designer, who is celebrated for her modern interpretations of classic Indian garments. She foregrounds the artisanal skill of local craftspeople and locally sourced materials as an alternative to mass-production practices. Rauschenberg, a great enthusiast of Asha’s work, modeled her clothes in the 1990s. Asha’s designs are in the collection of the Victoria and Albert Museum, London.

In May 1975, the Sarabhais hosted Rauschenberg again when he traveled to Ahmedabad with a group of assistants and friends, including Gemini G.E.L. printers, Gemini founder Sidney B. Felsen, and Rauschenberg’s son Christopher. During this particular stay, Rauschenberg made the Bones and Unions editions (both 1975), and following Anand’s suggestion, he worked with traditional, handmade, rag paper at the Gandhi Ashram, also in Ahmedabad. Rauschenberg acquired new and secondhand fabrics from local markets to incorporate into the projects, and he orchestrated a collaborative creative process that involved workers from the ashram, craftspeople, and the Sarabhai family, including Asha and Suhrid’s young sons Sanjay and Samir.

Excerpt from Interview with Asha and Suhrid Sarabhai by Cameron Vanderscoff, 2015

S. Sarabhai: That’s at the handmade paper mill after the pulp is made using the rags, which are shredded. It comes into this. And these trays, this line was given to us, so then with a bucket it’s poured into the tray. And Bob would then insert whatever he wanted to insert in there, bamboo and fabric and others. So this is at the handmade— Many of these workers are still there at the mill. They come from Bihar and eastern UP [Uttar Pradesh] and they’re still there. We go to this mill quite a lot still.
Q: So you have a lot of people who work there for their whole working life then? We’re now talking about forty years since that photo.
S. Sarabhai: I know. So these people were in their twenties, but they’re still there. They all recognize us when we go there.
A. Sarabhai: A few, some of them are still there. And there’s some elderly—
S. Sarabhai: Because it’s wonderful paper—it’s really wonderful paper.
Q: Do you have any sense about what any of their impressions were of this visit?
S. Sarabhai: Curiosity, I think. Curiosity.
A. Sarabhai: But they were quite cool about it too.
S. Sarabhai: Bob was very—
A. Sarabhai: Respectful of them.
S. Sarabhai: Yes, absolutely, completely.
A. Sarabhai: And very respectful of the space.
S. Sarabhai: Respectful of everyone who helped.
A. Sarabhai: There was no question of going in and taking over; it was, “I’m working in your space.” And he did it very quietly, very calmly. So it really wasn’t disruptive.
S. Sarabhai: And with great humility. And Bob was really fantastic in terms of his interaction with the craftsmen who worked with him. He was really fabulous, fabulous in terms of—not polite for the sake of politeness, but just naturally he was just such a gracious kind of person. He really was.
Q: And I think the other thing that seems to be emerging in these photos is this sense of how really everybody got pulled in in some way. So you took photographs and there are other photographs of you, Asha, molding the mud.
A. Sarabhai: I loved it, actually. It was wonderful to be involved in the making of it because you would just— Everyone was doing what was being done. It was really good fun.
S. Sarabhai: It was quite contagious, that whole excitement. When you went to the studio at that particular moment of time, you couldn’t just sit back. And Bob did not mind people coming there, but once you went there, you could not help but just roll up your sleeves. [Laughs]
A. Sarabhai: But I think that that was a nice thing; that he never worked as though he was, “I’m the artist and you can all come and take a peek and then go away.” It was, “Hey, come on, why don’t we all do this?” And it was very involving of other people—
S. Sarabhai: Very inclusive, very inclusive—
A. Sarabhai: —in a quiet sort of way.
S. Sarabhai: —of all ages, the children included. Nothing to do with grown-ups—everyone. If they wished to help, “Please do, do this.” [Laughs] It was really great fun.
Document
DOWNLOAD FULL TRANSCRIPT