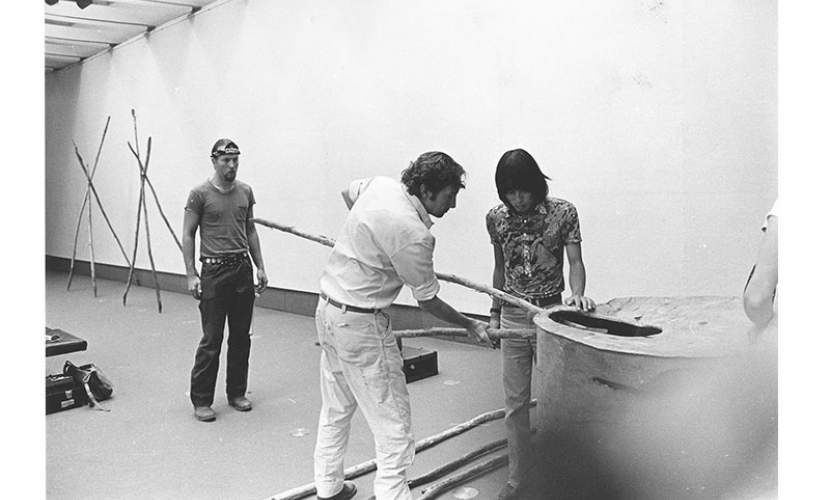 Robert Petersen, Rauschenberg, and Hisachika Takahashi working on Untitled (1974) from the Made in Israel series (1974), created for Rauschenberg in Israel, Israel Museum, Jerusalem, 1974 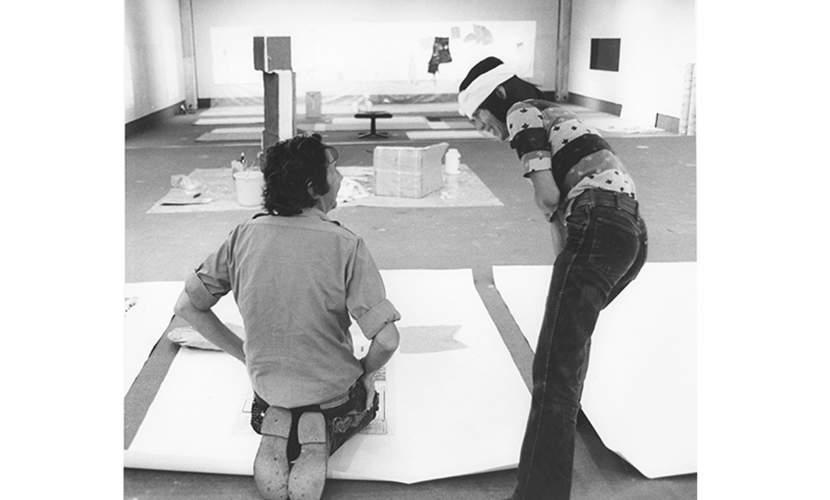 Rauschenberg and Hisachika Takahashi during preparations for Rauschenberg in Israel, Israel Museum, Jerusalem, May 1974. Works shown in progress are from Rauschenberg’s Scripture series (1974). Photo: Unattributed 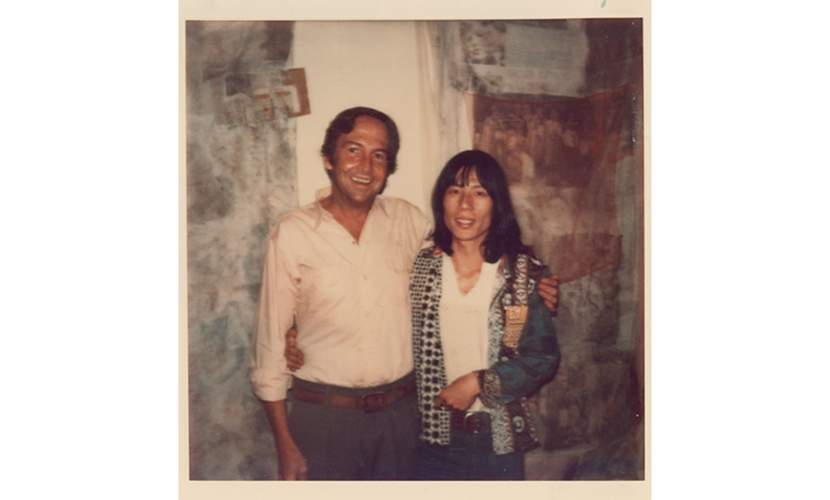 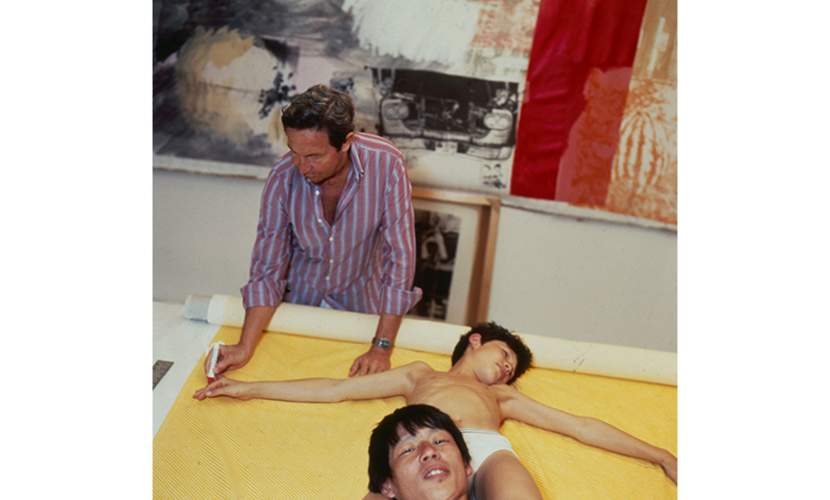 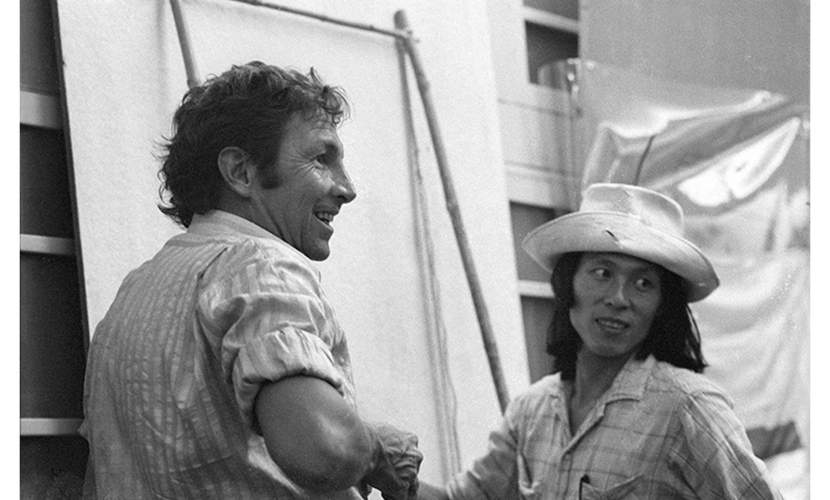 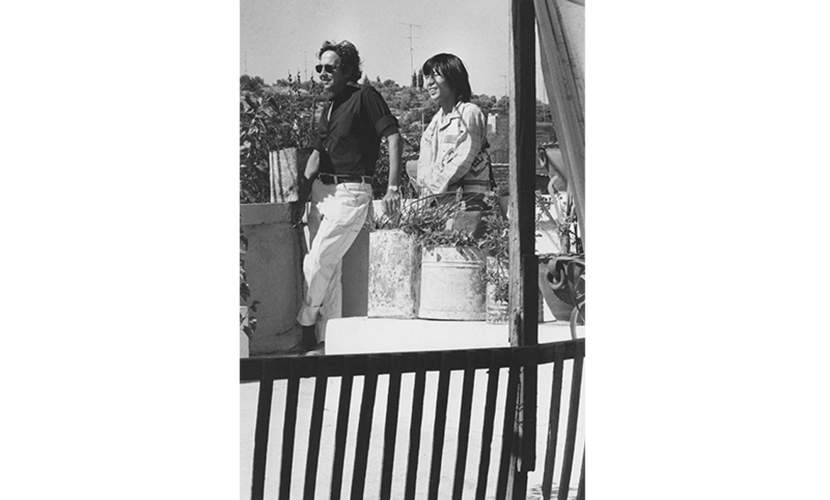 Born in Tokyo in 1940, Hisachika Takahashi is an artist whose work deals with memory as well as with the creation of community through collaboration. He specializes in print, collage, and assemblage. His collaborative project From Memory Draw a Map of the United States (1971) includes drawings by Rauschenberg, Cy Twombly, Jasper Johns and eighteen other artists. Takahashi immigrated to the United States in 1969 from Italy. He met Rauschenberg shortly after his arrival and was brought on to help with the Carnal Clock series (1969). Takahashi subsequently became Rauschenberg’s studio assistant as well as the overseer of his New York building and studio—381 Lafayette —where Takahashi resided for over three decades.
Excerpt from interviews with Hisachika “Sachika” Takahashi by Christine Frohnert, 2015
Q2: We are now looking at three cast apple cores [Unitled sculptural editions: cast 24-karat gold in 2001; cast sterling silver and cast bronze in 2003]. I know it’s a wonderful story, which started in 1988 on the roof on 381 Lafayette Street, right?
Takahashi: Yes. I was taking care of the roof plants, a lot of plants in the roof. There are sometimes strawberries but of course the season’s over. One day I decided I would put in some plants that make fruit. Of course in New York it’s difficult and in Manhattan especially, with the pollution. But I was going to try to put in an apple tree. The tree was supposed to be sold to me, a New York apple. I thought about the coming green apples and it ended up to be, I think McIntosh or something. It’s colorful and quite small but delicious to eat. What happened is you have a flower, a coming flower, but no insects to pollinate it. So I have an idea and I put in two feathers in long sticks and I went through, one by one in the flowers—to pollinate. It ended up I had one hundred apples growing in the tree. Every time I’d go to the roof I’d bring a couple of apples to the table. Rauschenberg would say, “Where did they come from?” I’d say, “Your tree on the roof.” So he started eating. Then one time he started to put an apple core and he said, “I want to make a sculpture.” I couldn’t figure out why—but anyway I must find him someplace to do the casting. Luckily two blocks from Rauschenberg’s house there was a man who could cast anything.
I asked the man to cast apple core and it’s supposed to be in gold. The man made it except when he was done, the leaf had disappeared. I said, “But the leaf was there.” So I went home. I said to Bob—Rauschenberg, but Bob he’s called. “It doesn’t have leaves.” So Bob said, “So what? Go to the roof to get another leaf.” So I said, “Yes, maybe, a good idea.” So the leaf I bring into Chinatown, to my jewelry shop. I asked, “Will you make me cast for this one in gold?” They have no problem.
Document
DOWNLOAD FULL TRANSCRIPT