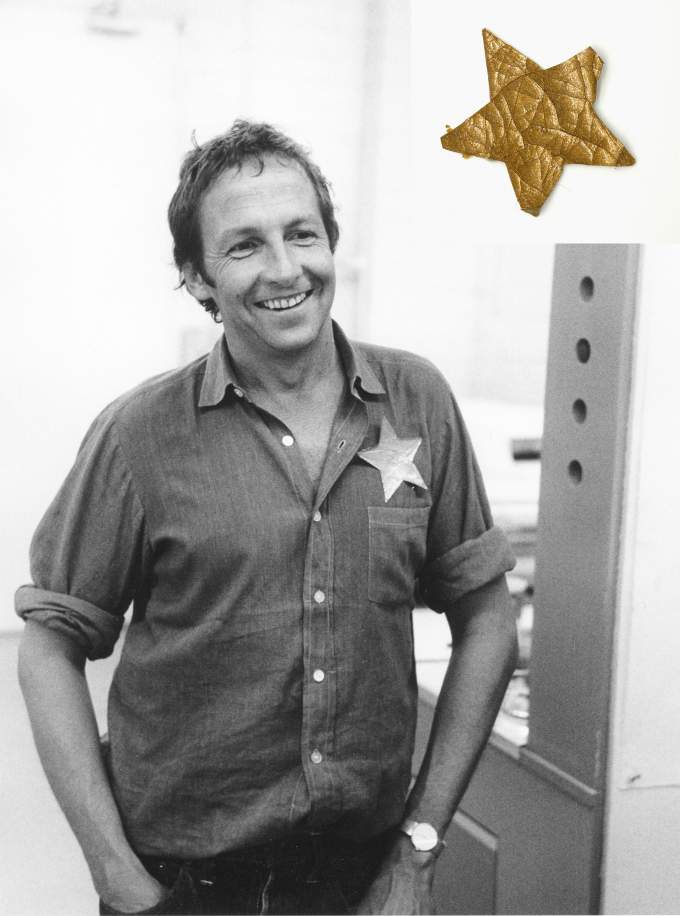 A black-and-white photograph of Rauschenberg smiling broadly, wearing a star badge on his shirt, was taken by Sidney Felsen, while Rauschenberg was working at Gemini G.E.L. on his Stoned Moon project.

On the invitation of NASA, Rauschenberg journeyed to Cape Canaveral, Florida in July 1969 to witness the Apollo 11 space launch—the first mission to land man on the moon. The Stoned Moon project, consisting of thirty-four lithographs, was created by Rauschenberg and produced in collaboration with Ken Tyler, a master printer at Los Angeles–based Gemini G.E.L. studios. Source images for the edition came from NASA charts, maps, and pictures he received at the launch.

So why the star while working on this project? According to a story shared by Sidney Felsen in his oral history, it was all in good fun: “Bob was born and grew up in Port Arthur, Texas. Texas is associated with sheriffs and so somebody—one of the wise-ass printers in the shop—decided to make a sheriff’s badge and give it to Bob. It’s gold, actually. It’s a gold star.” A gag that shows the playfulness and personal connection Rauschenberg had with the printers.

Felsen described Rauschenberg as “a super collaborator, in the sense that he was very human in his approach. He appreciated everybody’s efforts.” The star illustrates collaboration at its best.

“Bob was always at the press, talking to the printers, cracking jokes, making humorous remarks. Made everybody happy. But at the same time was looking at the art coming off the press. When the proofing session was over and he was saying goodbye, you could really see tears in people’s eyes. They just loved having him around.”

Perhaps this is why the star, well-worn and faded, can still be found in the archives as part of Rauschenberg’s treasures.