Rauschenberg: the 1/4 Mile and In and About L.A. at LACMA 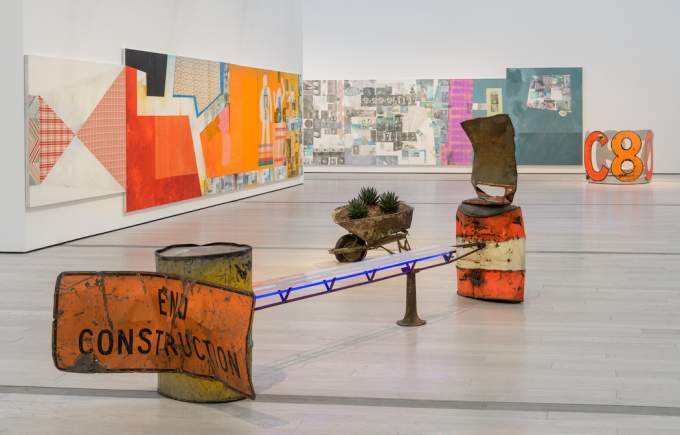 Rauschenberg: the 1/4 Mile and In and About L.A. at LACMA

The Los Angeles County Museum of Art (LACMA) presents Rauschenberg: The 1/4 Mile, an expansive installation featuring pioneering American artist Robert Rauschenberg’s magnum opus The 1/4 Mile or 2 Furlong Piece (1981–98). Completed over a period of 17 years, The 1/4 Mile is composed of 190 panels that, combined, measure approximately 1,000 feet—or nearly a quarter mile—in length. Signifying the distance between Rauschenberg’s studio and his home on Captiva Island, Florida, the quarter-mile span is representative of the artist’s central belief in working in the “gap between” art and life. Cross-cultural exchange was a driving force of Rauschenberg’s art practice. He traveled extensively throughout his career, and he sourced the wide range of materials and imagery included in The 1/4 Mile from Asia, Europe, Latin America, northern Africa, and the United States. The piece comprises an eclectic array of materials including various textiles, images culled from mass media, and photographs by the artist that are interspersed between bold passages of paint, while everyday objects such as chairs, cardboard boxes, and traffic lights add sculptural depth. The work also has an audio element, composed of sounds that Rauschenberg recorded during his travels. Together the visual and aural components of The 1/4 Mile, coupled with its monumental scale, create an immersive viewing environment. This exhibition marks the first time the work will be exhibited in its entirety.

Rauschenberg: The 1/4 Mile is co-curated by Michael Govan, LACMA CEO and Wallis Annenberg Director, and Katia Zavistovski, Assistant Curator of Modern Art. This installation will occupy the entire floor of BCAM, Level 3.

Rauschenberg often referred to The 1/4 Mile as a self-portrait, and the work reveals the broad scope of his artistic practice through the multitude of materials and techniques employed (including printmaking, photography, sculpture, painting, and use of technology). The piece serves as a self-contained retrospective of the artist’s oeuvre, referencing important bodies of work such as his White Paintings (1951), Combines (1954–64), Currents (1970), Cardboards (1971–72), Spreads (1975–83), and Gluts (1986–94); his metal paintings including Shiners (1986– 93), Urban Bourbons (1988–96), and Night Shades (1991); and the series Anagrams (A Pun) (1997–2002). Some of these references are evident in works on view in Rauschenberg: In and About L.A. (August 11, 2018–February 10, 2019), a LACMA exhibition focusing on Rauschenberg’s longstanding relationship with Los Angeles that features a selection of works he made in L.A. between the late 1960s and the late 1990s. In addition to being self-referential, in The 1/4 Mile or 2 Furlong Piece Rauschenberg also includes images of artwork from multiple cultures and time periods, situating his work in the context of a global art history.

“Robert Rauschenberg’s The 1/4 Mile or 2 Furlong Piece has always been an inspiration to me. This work is an immersive meditation on the whole world of culture as well as the artist’s own life of ideas. It’s global and personal—a museum of images unto itself,” said exhibition co-curator Michael Govan, LACMA CEO and Wallis Annenberg Director.

Rauschenberg: In and About L.A.

Rauschenberg: In and About L.A. is a special presentation focusing on the indelible impact that Los Angeles had on Rauschenberg’s artistic practice. On view in the Resnick Pavilion, the exhibition comprises works from LACMA’s collection as well as loans from the Robert Rauschenberg Foundation, Gemini G.E.L., and the Lyn and Norman Lear Collection. Highlights of the exhibition include two large-scale prints from LACMA’s collection: Booster (1967), a life-size self-portrait printed at Gemini G.E.L. that at the time of its creation was the largest hand-pulled print ever made and the first to combine lithography and screenprinting; and Currents (1970), which, at 54 feet long, exceeded Rauschenberg’s previous experiments with monumentality. Rauschenberg created an audio montage of contemporaneous news broadcasts to accompany Currents when it was first exhibited in 1970. This audio component was recently re-discovered and digitized by the Robert Rauschenberg Foundation.

Rauschenberg: In and About L.A. presents Currents with its original soundtrack for the first time in almost 50 years. Also on view is Rauschenberg’s Rodeo Palace (Spread) (1975–76), photographs of Los Angeles from the artist’s In + Out City Limits series (1981), and his L.A. Uncovered screenprints (1998).

"Los Angeles played a pivotal role in Rauschenberg's artistic development. Over the course of six decades he created some of his most groundbreaking work in L.A., inspired by the environment, the region's technological innovations, and the collaborative opportunities he found here. Many of the works in In and About L.A. are also notable precedents to or are directly referenced in The 1/4 Mile—this is a unique opportunity to show these works concurrently," said Katia Zavistovski, Assistant Curator of Modern Art and curator of Rauschenberg: In and About L.A.