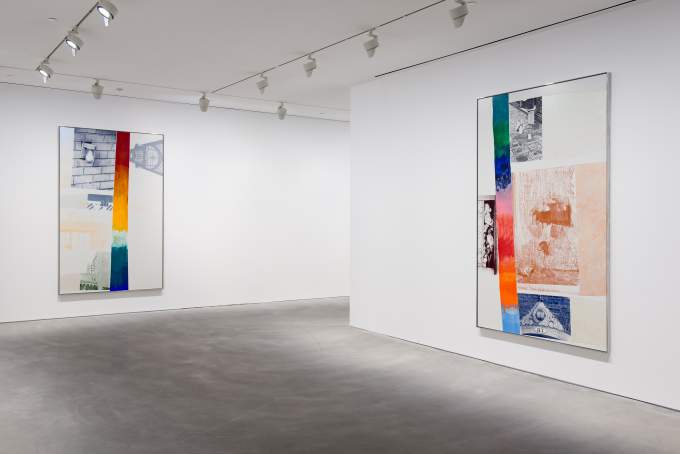 Pace Gallery is pleased to present an exhibition of Robert Rauschenberg’s Vydock series – large-scale works of acrylic paint, silkscreened images of Rauschenberg’s own photographs and graphite on white aluminum. Rarely seen since its initial exhibition in 1995, the Vydock series features the white background that characterizes much of Rauschenberg’s later production, and bridges the artist’s earlier works on metal with his later Anagram (1995–97) and Anagram (A Pun) (1997–2002) series. Presented in Pace’s recently-opened gallery in Hong Kong’s new H Queen’s building, Robert Rauschenberg: Vydocks will be on view September 19 – November 2, 2018, with a special opening reception on Tuesday, September 18, from 6 – 8 pm. On the occasion of the exhibition, Pace will publish a full-color catalogue with an essay, in both English and traditional Chinese, by American poet and critic John Yau.

“Rauschenberg was a tireless innovator in a constant quest to capture our common yet also intrinsically personal experience of the ephemerality of time and our shifting perceptions and recollections of the world around us,” said Marc Glimcher, Pace Gallery President and CEO. “He was not an artist bound to a particular medium or set of rules, rather he consistently challenged existing parameters of art and prevailing frameworks of modernism. While the Vydock series represents a pivotal phase of Rauschenberg’s ever-evolving practice – uniting his early and late works and introducing key motifs into his creative arsenal; these works have gone largely unseen and underappreciated since they were first shown over twenty years ago. With this exhibition, we are thrilled to take a critical step to change that course, and honored to reintroduce the series to Rauschenberg scholars, collectors and the public alike.”

Rauschenberg completed the Vydocks as the last painting series in which he used acrylic, silkscreened images, and metal supports. The vertical passages in Vydocks traverse a wide chromatic spectrum in a kind of farewell engagement with a medium the artist shortly set aside. The exhibition will include a selection of eight Vydock works, each of which Rauschenberg created on identical sheets of bonded aluminum, measuring around eight feet high by five feet wide. The proportions of the panels, which the artist custom ordered and prepared, suggest the significance that Rauschenberg placed on shaping his work on a human scale, approximating the height and width of a person’s reach. Each panel has a pristine, resistant white surface onto which he brushed acrylic paint, transferred silkscreen images, and drew graphite lines—three distinct elements traditionally relating to three different artistic practices: painting, photography, and drawing. Rauschenberg harnessed these techniques to create compositions of balanced coexistence, underscoring his openness to diverse materials and processes and his embrace of the dialogues and understandings that such juxtapositions can catalyze.

The Vydock works possess a similar balance in their imagery, with neither abstraction nor representation dominating. Each panel features Rauschenberg’s own photographs, capturing everything from a seagull resting on a pier to a towel hanging on a clothes line, silkscreened on either side of slanting painted multi-color vertical bands, which rise along the height of the metal support. The pairing of photographic images and painted passages that reoccurs through the series reveals Rauschenberg’s ongoing exploration of the relationships between abstraction and representation, painting and photography, and the original and the copy. An ardent believer in time’s unrepeatability and the unique significance and substance of every moment, Rauschenberg relentlessly sought to create art that captured the elusive nature of time, perception, reality and memory. The Vydock series represents a critical element of that artistic and philosophical pursuit; and shows the artist striving to express the infinitely different ways one sees and remembers the world.