From 1974 to 1976, Rauschenberg created the Hoarfrosts, a series of artworks comprised predominantly of unstretched fabric featuring images and texts transferred from magazines and newsprint through a solvent process. The Hoarfrosts often include collage elements, such as found textiles, cardboard, paper bags, and in rare instances rope, pillows, or other materials. Rauschenberg chose to display these objects unconventionally, attaching them to the wall with only nails or pushpins through hand-sewn eyelets at the top corners of the fabric so that they hang freely, often moving slightly in response to the air currents around them. The term “hoarfrost,” which Rauschenberg borrowed from a line in Dante’s epic poem, the Inferno, refers to a buildup of ice crystals that form instantly when water droplets come into contact with a freezing surface. Perhaps Rauschenberg chose this name to refer to the hazy, ghostly quality of the residual images left on the fabric by the solvent transfer process. According to Rauschenberg, he became interested in textiles after artist James Rosenquist gifted him a bolt of silk. His inspiration for transferring images onto fabric came while printmaking, when he realized that the cheesecloth used to clean the ink off of lithographic stones retained trace images from the previous printing. These discoveries culminated in a series that reflects the fragility and ephemerality that Dante described, while maintaining the themes of “multiplicity, variation, and inclusion” that Rauschenberg embraced throughout his career.1

During the period in which Rauschenberg began working on the Hoarfrosts, he traveled to Israel and India, and was inspired by local craftspeople to utilize fabrics, paper, and other related materials in new ways throughout his practice. In conjunction with the unique Hoarfrosts, Rauschenberg created a set of nine editioned works as part of the Hoarfrost Editions, produced in 1974 at Los Angeles–based print studio Gemini G.E.L. Through this collaboration, Rauschenberg met printmaker Robert Petersen, who later left Gemini G.E.L. to co-found Untitled Press, Inc. (UPI) with Rauschenberg in Captiva, Florida. With Petersen’s assistance, Rauschenberg produced the majority of the unique Hoarfrosts at UPI, sometimes recycling imagery from the Hoarfrost Editions. His unexpected combinations of newsprint, colored fabrics, and altered images contributed to his efforts to “dematerialize the surface…so the light would have something to fall on,” as he put it.2 The series reflects Rauschenberg’s interest in the collection and re-contextualization of found materials. In addition to a wide range of transparent fabrics, Rauschenberg frequently incorporated paper (see Untitled, 1974) or cardboard (see Untitled, 1975) into the Hoarfrosts. These material relationships between different series show how the Hoarfrosts grew out of the artist’s experimentation in other areas of his practice.

Rauschenberg first began developing the solvent transfer technique on a 1952 trip to Cuba with artist Cy Twombly, and he continued to use the method for decades after. Series including the early Dante drawings (1958–60), and his later print collaborations, such as Stoned Moon (1969–70), Pages and Fuses (1974), and Airport Suite (1974), reveal this continued interest in image transfer techniques. The Jammers, produced in 1975–76 after a trip to India, are aesthetic successors to the Hoarfrosts. While the wall-based, flowing Jammers adopt a similar structure to the earlier works, Rauschenberg removed the transfer images from them altogether. He constructed these later fabric pieces usually from bright, colorful textiles, rather than the muted cheesecloth or silken sheets used in the Hoarfrost series. Rauschenberg’s colorful creations in the later series were inspired by the bright fabrics he saw while working at an ashram in Ahmedabad, India and touring the textile markets there. Rauschenberg’s son, Christopher, later described his father as being “just amazed at the colors. A new sense of fabric came to him there.”3  A brief and little-studied series, Rauschenberg’s Hoarfrosts display the artist’s interest in and recycling of materials and forms. Through approximately one hundred and fifty unique and editioned works produced over two years, Rauschenberg continued his exploration of the boundaries of art.

This text was prepared for a graduate Research Methods course taught by Michael Lobel, Professor of Art History, at Hunter College, CUNY (fall 2019). 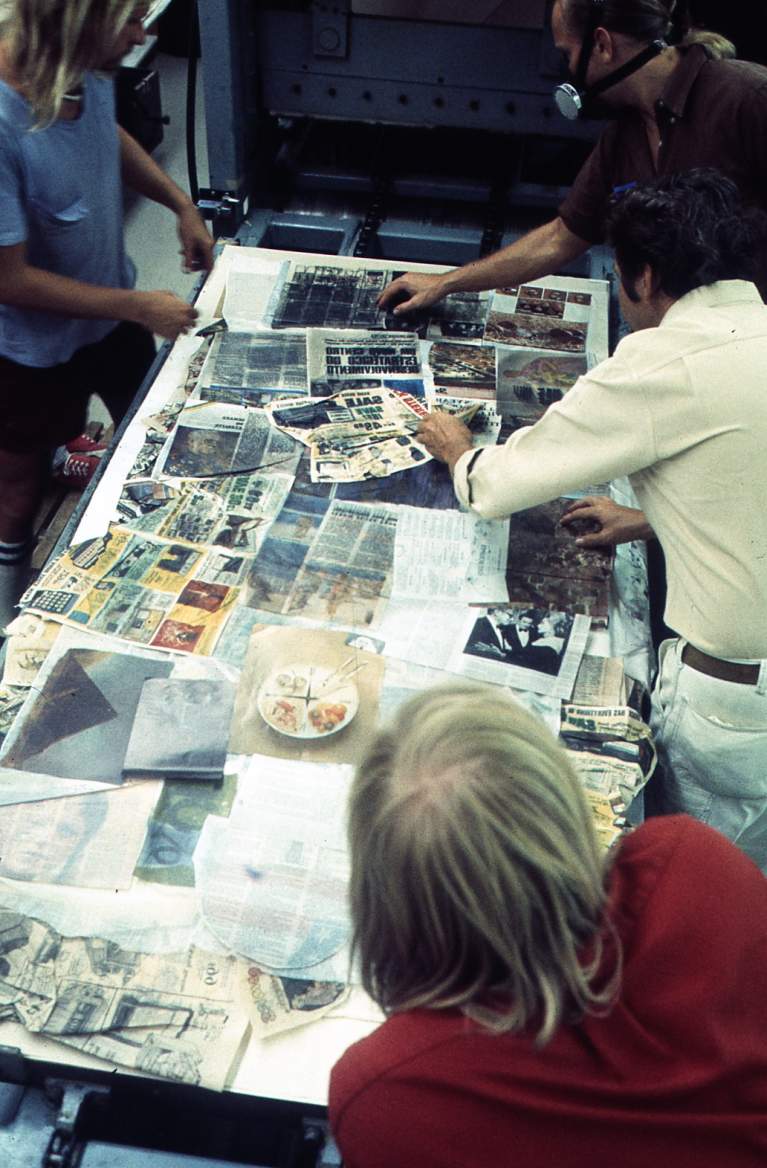 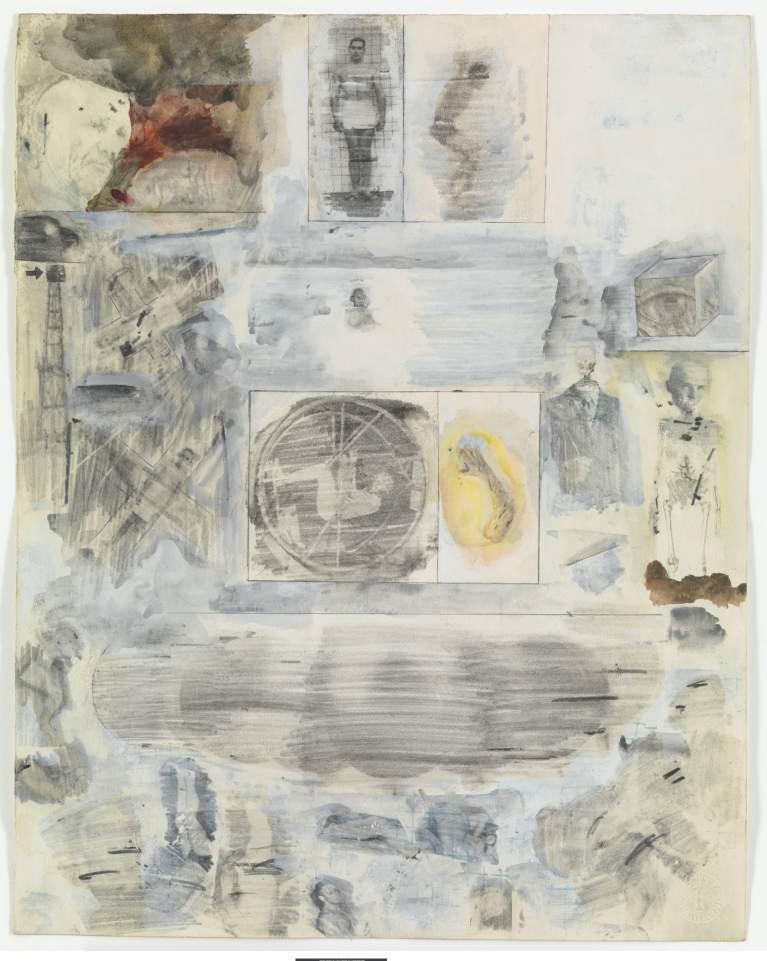 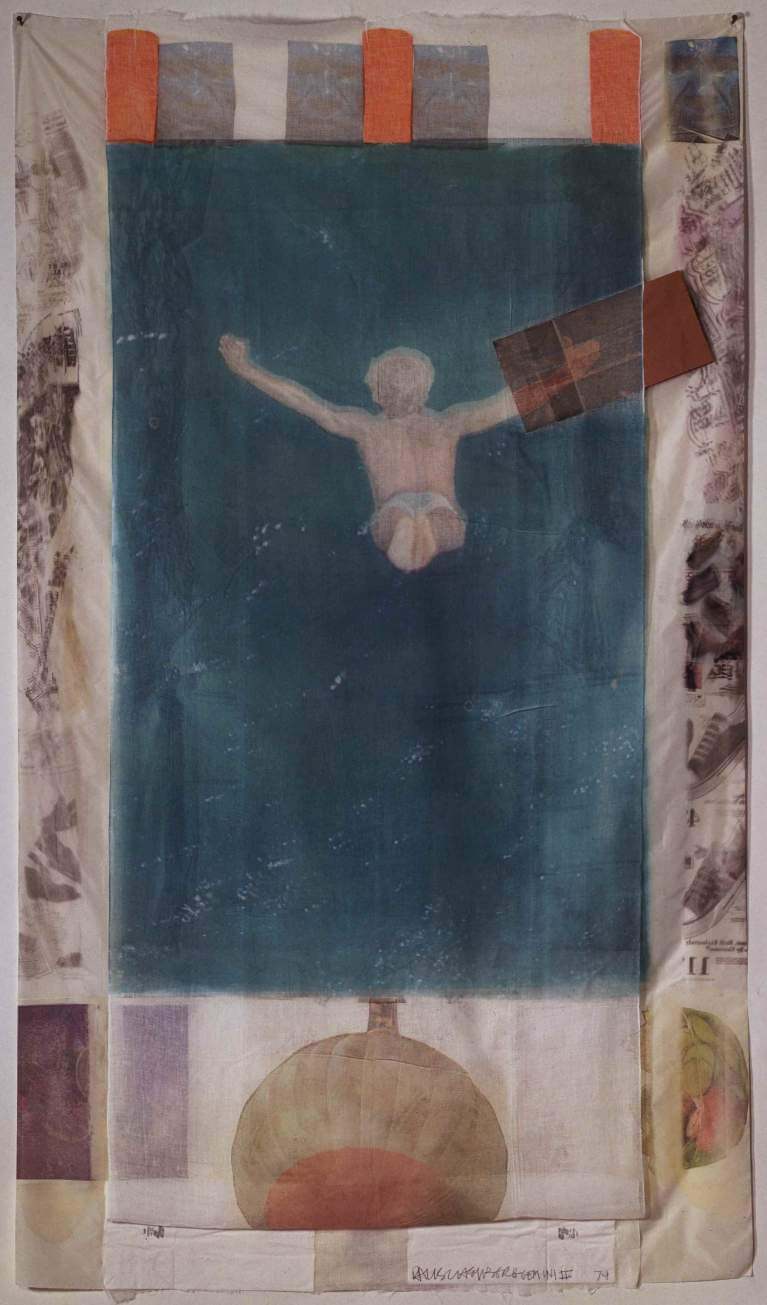 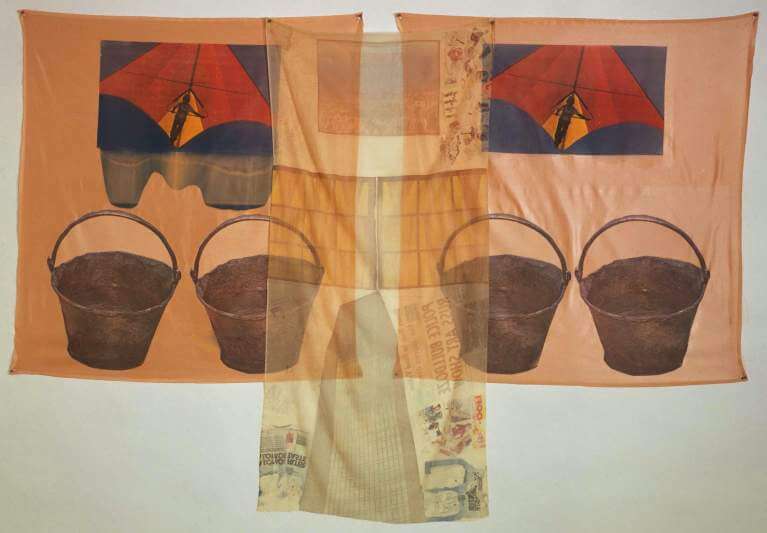 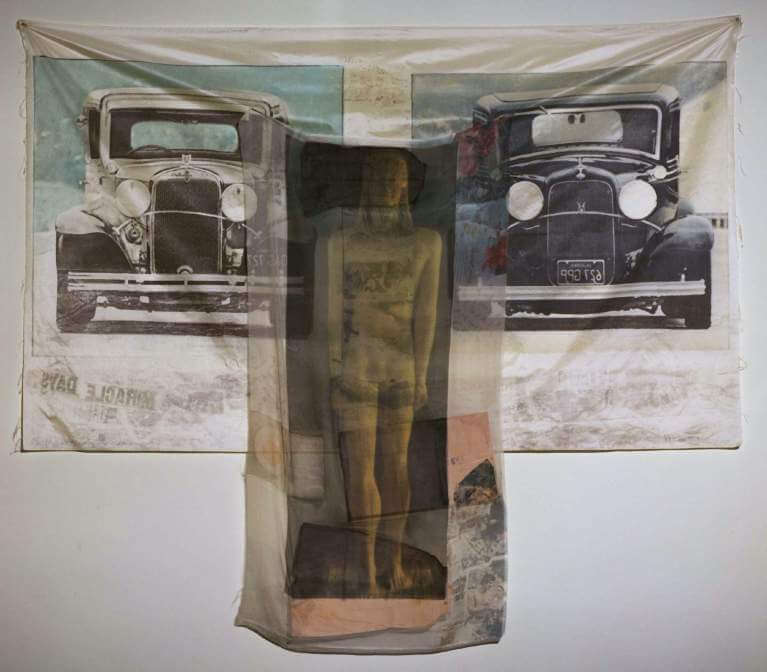 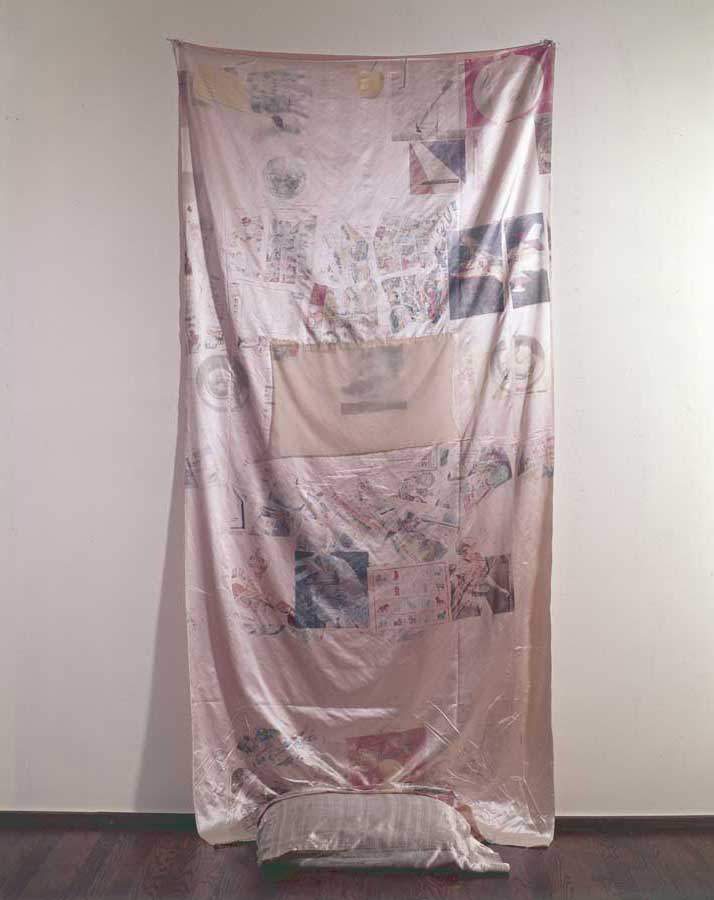 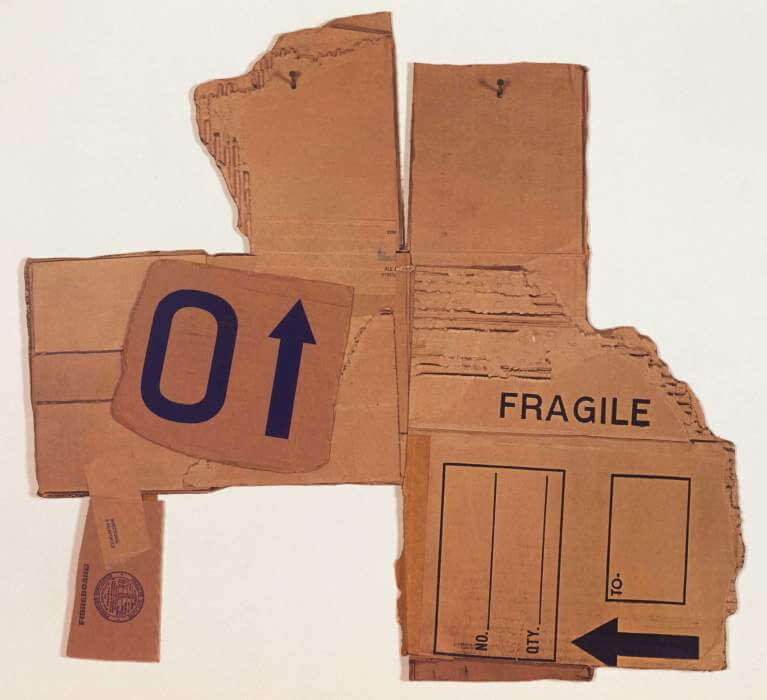 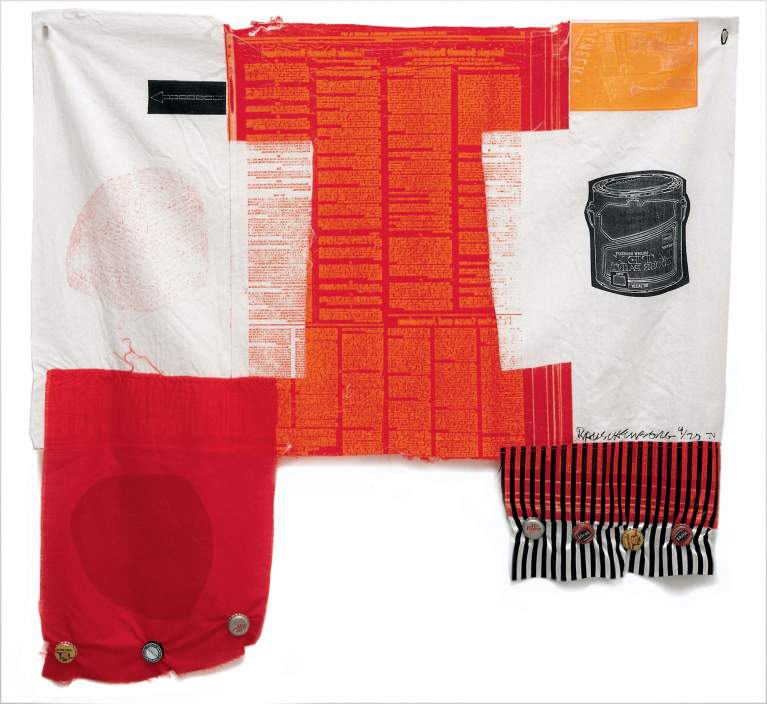