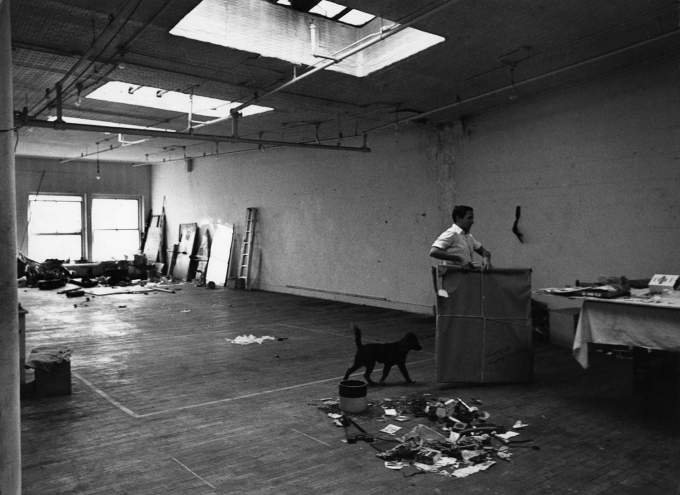 Robert Rauschenberg and his dog Laika in his Broadway studio, 1965. Photo: Attributed to Ugo Mulas

In its stewardship of Robert Rauschenberg’s artistic legacy, the Robert Rauschenberg Foundation is undertaking the first Catalogue Raisonné dedicated to the sixty-year career of this protean artist. The catalogue, which will provide a comprehensive study of Rauschenberg's painting and sculpture, will be published in a digital format. As part of this project we are pleased to announce that the Foundation is currently accepting applications for an experienced Project Manager to oversee this multifaceted project.

This position will be responsible for day-to-day management of the Catalogue Raisonne as well as its primary point person for internal and external communications. A complete job listing including responsibilities, qualifications, and how to apply can be found on the Foundation’s job listings. Applications will be accepted through October 29, 2021.

Working in a wide range of subjects, styles, materials, and techniques, Robert Rauschenberg has been called a forerunner of essentially every postwar movement since Abstract Expressionism. He remained, however, independent of any particular affiliation. At the time that he began making art in the late 1940s and early 1950s, his belief that “painting relates to both art and life” challenged the prevalent modernist aesthetic. The celebrated Combines, begun in the mid-1950s, brought real-world images and objects into the realm of abstract painting and countered sanctioned divisions between painting and sculpture. These works established the artist’s ongoing dialogue between mediums, between the handmade and the readymade, and between the gestural brushstroke and the mechanically reproduced image. Rauschenberg’s lifelong commitment to collaboration—with performers, printmakers, engineers, writers, artists, and artisans from around the world—is a further manifestation of his expansive artistic philosophy. While Rauschenberg was a preeminent American artist of the twentieth century, his career continued into the twenty-first and his work remains contemporary and entirely relevant to a younger generation of artists.

This catalogue will be designed to contain all that is found in a conventional catalogue raisonné and to meet scholarly and market-based needs. In keeping with Rauschenberg’s own expansive artistic philosophy, however, we intend in addition to engage a broader audience and to include writers with various areas of interest and expertise; beyond art historians, there will be writings by social historians, conservators, and practicing artists, among others. With a multitude of diverse voices, it is our intention to present a range of perspectives that is commensurate with, and at times even goes beyond, the expansiveness of Rauschenberg’s thinking as well as his spirit of inclusivity. Furthermore, we will make use of all the technical possibilities of a digital publication to demonstrate Rauschenberg’s interests, processes, and collaborations.

The Robert Rauschenberg Foundation expands the legacy of artist Robert Rauschenberg (1925–2008) who believed strongly in the power of art as a catalyst for social change. The Foundation delivers on its mission through on-going research and support for exhibitions, while sustaining the well-being of innovative artists and the work of socially engaged institutions that embody the same risk-taking, inclusive, and multidisciplinary approach that Rauschenberg exemplified in both his art and philanthropic endeavors.

The Robert Rauschenberg Foundation primarily supports small to midsize arts and socially engaged organizations that are contrarian and experimental, even courageous, in driving towards equity. In addition, the Foundation amplifies the creative life of artists and scholars across the disciplines through residencies, commissions, and accessible public platforms. Finally, the Foundation supports research, exhibitions, publications, academic partnerships, and special projects across the globe that promote the legacy of Rauschenberg’s joyful, responsive, and irreverent approach to making work while living an empathetic and meaningful life.