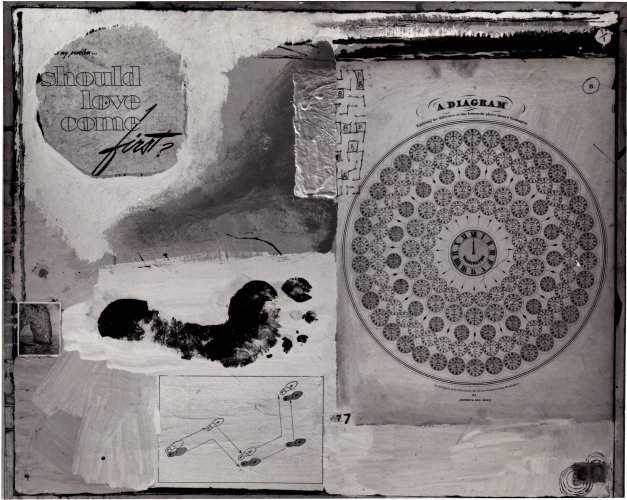 In the fall of 1950 Rauschenberg approached Betty Parsons, the art dealer to many of the Abstract Expressionists, for a critique of his work. To his surprise, Parsons offered him what would be his first solo exhibition to be held at her New York gallery the following spring. Rauschenberg later described the works he exhibited—largely black, white, yellow, and silver abstract paintings that incorporate unconventional art materials, such as locks of his hair and mirrors along with newsprint and fabric collage—as “allegorical cartoons.” Of the original works exhibited (thirteen were included on the original checklist), only four are extant. The remaining works were either reworked by the artist into other artworks, or were lost or destroyed and known only through contemporary descriptions and documentary photos taken by Aaron Siskind. Although none of Rauschenberg’s works sold at the Parsons exhibition, and despite lukewarm reviews, this exposure brought recognition to the twenty-six-year-old artist and led to important introductions, including to composer John Cage and to Rauschenberg’s future gallerist Leo Castelli.