This guide provides links to select digitized reference copies of Rauschenberg's calendars. Materials are provided in this guide are for research purposes only. For reproduction requests, email the archives.

Overview
Throughout his career, Rauschenberg and his studio kept various calendars detailing his travels, exhibitions, appointments, and other information. Entries were made by Rauschenberg and/or assistants. Levels of detail are not consistent and vary throughout the years.

Access Note
Digitized calendars are viewed via PDFs, which use an oversized non-standard 13" x 19" page format to allow for legibility of calendar entries. Larger file sizes may take longer to view / download.

1960s
There are only two known calendars from the 1960s. These are the earliest calendars in the collection.

Not digitized: Select years also have Captiva wall calendars as well as a daily calendar book (1972) and daily logs (1976).

1980s
While there was no consistent calendar style used in 80s, at the beginning of the decade Rauschenberg and his studio assistants primarily shared calendars, sometimes multiple copies with different annotations.

Not digitized: Select years also have travel logs (1990-1995) as well as annual calendars labeled as "office" or kept by a specific studio employee.

2000s
Throughout the 2000s, Rauschenberg and the studio employees kept separate calendars. Digitization of annual calendars that are labeled as "Rauschenberg" or "RR" is in process. Please use the request links below to prioritize completion.

Not digitized: Each year also has annual calendars labeled as "office" or kept by a specific studio employee. Employees kept calendars through 2010. 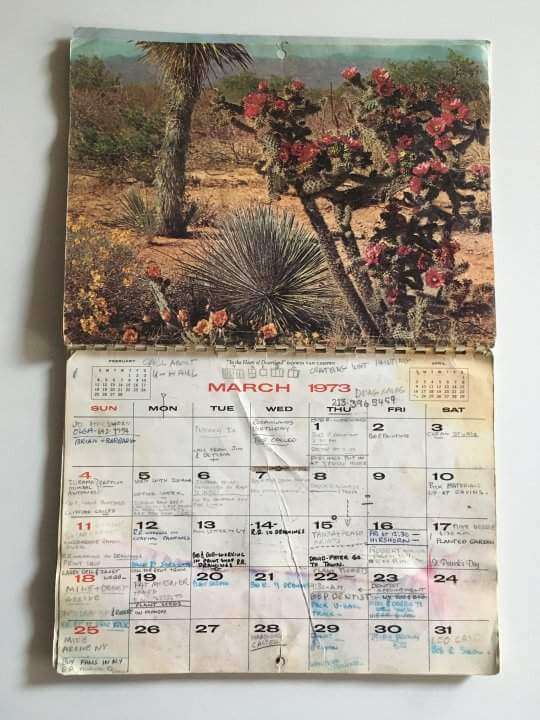